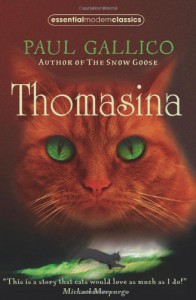 I saw the movie long before I read the book, but it was a favorite in my childhood. The basic story is the same but a lot of the details are different. I've tried to imagine how I would have received the book if I had read it first, but find it impossible not to contrast it with the movie experience.

Mary MacDhui lives in a village in Scotland and loves her cat, Thomasina. Her father is the local vet, though he really wanted to be a doctor. Both are strong personalities and very stubborn.

When Thomasina is hurt in an accident, her father disappoints Mary so deeply that it looks as if she'll never recover. I won't go into details in case someone who has never read the book or seen the film runs into spoilers. The story made a good Disney film with strong characters and an unusual plot for a cat story. As a cat person, I can easily identify with Mary, even though she's a child.

The setting adds a lot of charm and part of the story is narrated by Thomasina herself. I enjoyed reading it again, despite being an adult. It is, however, a thing of its time. Some of the human reactions are less than fully believable and it is unintentionally misogynistic. The Gypsies are portrayed in a bad light and the plot continuity isn't nearly as good in the book as it is in the movie.

I'm glad I read it, but I think this is the last time for me.