The Second Book of Crystal Spells 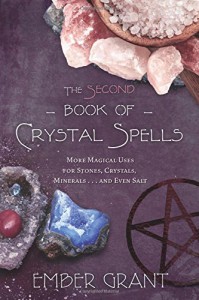 The first part of this book tells some really interesting things about salt in relation to crystals which I haven't come across before. I found this section very interesting and informative. Then the second chapter went into tarot card correspondences and I found this part much less helpful, suggesting several stones that might go with each card to the extent that the reader might as well make up their own system if they want to correlate crystals with cards at all.

This is followed by suggested spells, which are always subjective. Some interesting ideas for those who are looking for spells, which is after all what the book is about! The properties and spell suggestions for several kinds of crystals follow, especially different kinds of quartz and chalcedony. At some points I was made aware that I hadn't read the first book, which would be necessary to get complete information. While the rhymes for the spells were cringeworthy, the ideas themselves were solid and worth adapting.

One of the most interesting things the book talked about was making grids of gemstones, to enhance their power. It's an interesting idea and worth some experimentation. The book then goes on to suggest spells to use crystals for enhancing natural intuition. I liked that the appendices included a list of the stones dealt with in that book, including their crystal structures, as well as a glossary that covered both geological and new age terms. Overall it was interesting enough to make me curious about the first book in the series and to wonder if further books are planned.