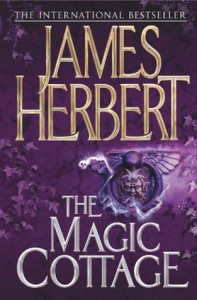 James Herbert can always be relied on to present an interesting story and this is one of his best. A couple looking for a house of their own are drawn to a remote cottage called Gramarye ("magic'' in old English) in the New Forest. It's a little over their price range but in need of serious repairs, leaving room for a little negotiation. Midge, the wife, is adamant that she must have this cottage and suddenly the money to make the difference appears in a rational way. She is an illustrator of children's books and the husband, Mike, is a session musician. Jobs arise in their usual haphazard fashion. The one unusual aspect of the transaction is that the previous owner had some odd criteria for whom the cottage could be sold to detailed in her will.

Mike is a city boy, but Midge grew up in the country so she adapts to the lifestyle change fastest. Mike takes a little longer to warm to remote life, especially when unexplainable things start to happen.

Things get a little weird from the start and progress as the story goes on. To explain further would require too many spoilers, but I can say that someone else wants the cottage for their own purposes. Discovering the nature of those purposes is an important part of the plot.

My favorite character was a little squirrel named Rumbo. I have no objection to most of the human characters, but this little guy was a heart stealer. All I'll say about the ending is that there was plenty of action and drama, though the magic aspect deviated into the sensational. It made for a very entertaining read all the way through.