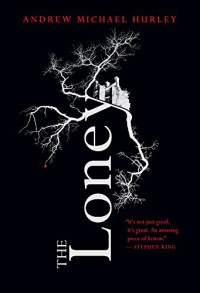 This story starts out taking its time, letting the reader get to know the characters. I thought when I was reading these early chapters that it explained why Stephen King liked it so much. It is told in first person, from the point of view of one of two brothers who visit the place referred to as The Loney every summer. It's a place where the tide comes in suddenly and the water is treacherous. Many bones have been found of those who misjudged their timing on the beach.

I'm not a big fan of stories about ordinary people so by the time I was getting close to halfway and starting to wonder when something was going to happen, I began to wonder why Stephen King had recommended it. One creepy couple had just made an appearance but otherwise I was finding it actually boring and far too religious for my taste. This was necessary to the story because there's a good and evil dichotomy involved, but it was still grating.

There were hints of something sinister happening but it was left to inference and never really explained. It was more a story about faith and fallibility than anything and although there was one moment when I felt fear from a purely physical source, too much was skipped over and left unexplained for me to feel like I've read a whole story or one that ever really got going.