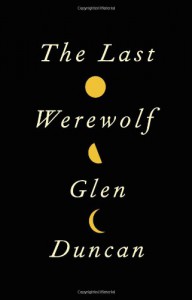 This started out with a different tone than I usually see in werewolf novels. More of a crime drama or conspiracy story tone as it's established that with the murder of a werewolf in Berlin, the protagonist is the last of his kind and an organisation that hunts down and kills werewolves will now be focused on him.

This was a very literary read. Despite a few descriptions of violence, the use of language made it a joy to read and the first person pov of the werewolf throughout felt very intimate and personal. I found myself wanting him to survive. It had a few very sexual references. Apparently being a werewolf sends the libido into animal rut. But both the sex and violence stopped short of becoming gratuitous, even if it nudged that parameter on occasion.

There was a lot of suspense well done and a few twists to keep things interesting. The last few chapters had me breathless!

The writing was so good that I went to see what else the author had written and found that this is actually a trilogy! I'll look forward to reading the next books. This was one of those stories that when it ended, I just had to sit a few moments, staring into space while processing the feels. It really had a strong emotional impact on me.