The Eyes of the Dragon 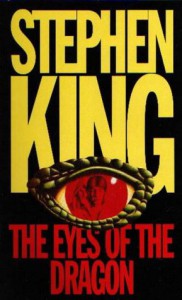 Stephen King says in the introduction to this book that although he was writing it for his daughter, he made an effort not to talk down to a child audience. Despite his good intentions, I felt that this story was written at a very young level. That doesn't stop it from being a good story, but I think he could have told it in his usual adult voice and made it even better.

The premise is fairly well-trodden ground; an evil wizard called Flagg, advisor to the king, craves power. The king has two sons, Peter and Thomas, and the eldest has been groomed for future kingship, while the wizard thinks the second son, Thomas, will be more easily manipulated. So the wizard concocts a plan to kill the king and get the elder son blamed for it, not realising that his efforts to teach the younger son his own sneaky ways will backfire on him when Thomas witnesses the murder.

This is where it all falls down. The evil wizard's plan moves ahead and Peter is blamed for his father's murder, but instead of outing the wizard, Thomas whines and begs for his help because he has not been prepared to be king.

Suspension of disbelief is stretched a bit in this story. I found Peter the most interesting character and was constantly frustrated over Thomas' failure to act. A little sibling jealousy just doesn't wash as sufficient reason to leave his brother rotting in a tower for years! Peter's escape plan also stretched credibility a little too far, unless you think of the story as a fairy tale in the same vein of magic as Rapunzel or Rumplestiltskin.

As much as I love Stephen King, I won't be reading anymore of his children's stories and may not bother with future attempts at Fantasy. He's let me down in this genre.