A Court of Thorns and Roses
Sarah J. Maas

From Venice With Love
Rosanna Ley

The Pillars of the Earth
Ken Follett
Progress: 92% 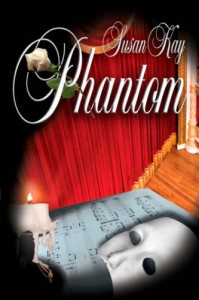 Phantom is a re-telling of the story of The Phantom of the Opera. It's a story that captures the imagination written by an author I've read once before and really enjoyed, so my expectations were admittedly high. I wasn't to be disappointed.

It starts from the point of view of Erik's mother, told in first person, and her experience of giving birth to the deformed child who would soon show remarkable development and an extraordinary aptitude for music and architecture. As an author with experience in writing historic fiction, Kay captures the era and brings to life the provincial attitudes of superstitious people who lived in small European villages with a sincere sense of reality.

The changes in point of view through several sections work well. We see through Erik's eyes more than once and see how significant people in his life view him. This one gets me in the feels. One of the sections left me feeling so much emotion overflowing that I couldn't read anything else that day! That's rare.

In the author's note, she mentions that she took information from all previous versions of the story, including the Andrew Lloyd Webber musical, but she had filled in background information that none of the other versions did, though I haven't read the original book so I don't know what elements might exist there.

This means that about 80% of the book is original story, built on the structure of what has gone before and filling in explanations for some things that came to be. The familiar part of the story comes in quite late, when Christine Daae enters the story. Even this was taken in Kay's own direction so that nothing was predictable. At first I felt some objection to the changes in that part, then it began to feel natural, like this was the best version of the story after all.

I finished with that same surge of emotion that I mentioned above, unable to start another book that day. The writing is effective, well researched and very much a professional standard. This was one of those especially good reads, against which all others are compared.