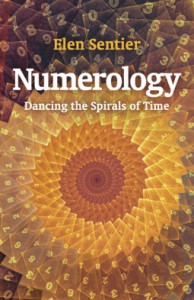 This was very different from what I expected. Rather than being specifically about numerology, the book is effectively a guidebook for a certain set of new age and Pagan beliefs that might or might not be associated with numerology. People interested in the title subject will have to wade through reincarnation, dowsing to establish your time of conception and some 'out there' concepts to find relevant information.

The graphs and charts make no sense to me at all. The author suggests meditating over them until it sinks in, but I'd rather have had the system explained in some manner than just thrown out there to absorb. Eventually she does write about number meanings and later gets into how to establish birth and name numbers in the same ways that other numerology books do, but there is only references to [number] people like 5 people, eight people, etc and no extrapolation of the relevance of birth number as opposed to name number apart from one is flexible and the other not, and nothing whatsoever about combining the two.

Overall I found the writing disjointed and digressive with very little clear information offered. I get the impression that the author does have some deep understandings, but just hasn't worked out how to express them. I had hoped for more, I admit. More commercial books on the subject seem cold and limited, but they actually offer more information than I found here. Very disappointing.