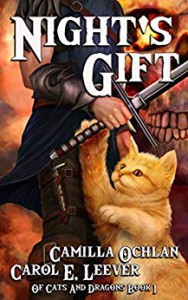 I think this one is best suited for Middle Grade quest fantasy readers. Omen, a young prince with psionic powers he struggles to control, goes out where he isn't supposed to be without his guards, resulting in his bracelet that helps him keep control getting pick-pocketed. His attempts to retrieve it lead to finding an unlikely friend, a night dweller prince from another kingdom with magical powers and fighting skills of his own.

One thing leads to another and the young princes get in over their heads and end up in battle games. The world building in this is very imaginative and varied. There are well-written battle scenes and a plethora of different species of characters. Tormy, who comes in late in the story, has an irritating speech pattern, yet he's endearing all the same. Like many of the older quest fantasy books, there is a lack of female characters.

It was a fun read and would appeal to readers of Ender's Game and similar stories directed at young, male readers. No squicky romances here. It was a fun adventure, if a bit 'young' for me. Book 1 of the Of Cats and Dragons series. I probably won't continue the series but wouldn't hesitate to give it to a nephew in the 10-13 age range.