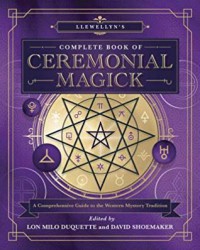 There are some very familiar names among the authors of this work, though I don't recognise all of them. The work consists of several smaller 'books' written by people knowledgeable about the various subjects covered. It starts out with introductions by Lon Milo DuQuette (a well-known and respected occultist) and David Shoemaker (whom I haven't come across before). This is followed by a section on the history of magic by Sam Webster (a name I've seen before but don't know well) which touches on some key events but makes no attempt to be comprehensive in the short space allotted.

Next is a section on Kabbalah by Anita Kraft and Randall Lee Bowyer. It has an extensive history, but I felt it failed to get the real depth of the subject. Why would an occultist want to learn about this? I know the answer to that, but I didn't feel it was provided for the newbie reader.

Then we have a chapter on Alchemy, written by Dennis William Hauck. Again, we got a good overview of history. I was pleased to see mention of the Greek occupation of Egypt, though I've yet to find a book that goes into Alchemy among the Ancient Egyptians compared to the Greek interpretation that is known as Hermeticism.

Demonology & Spirit Evocation by Dr Stephen Skinner comes next. This is one of those very familiar names. He explains the history of demonology and how the name 'Demon' got applied to a variety of pre-Christian spirits, both good and malevolent. Apparently he believes all magic comes from spirits, which many magicians might argue.

The Magick of Abra-Melin by Marcus Katz follows. I read the Book of Abra-Melin the Mage when I was in High School and fairly new to occult literature so I was a little surprised to see how steeped in Judeo-Christian religion this book actually is. The ritual to contact your Guardian Angel plays an important role and for that reason would be of interest to Thelemites. As with the other sections, this one gives a history and a general idea of what it's all about.

Enochian Magick and Mystercism by Aaron Leitch is about Angel Magick and provides some interesting history about the Elizabethan era and especially about John Dee. The Golden Dawn by Chic Cicero & Sandra Tabitha Cicero, authors I've heard of for years, follows. This one started out sounding like a recruitment advert for the Golden Dawn, but settled into history after the initial burst. I think this one crammed too much history of Western esotericism into one chapter. If I hadn't already been familiar with half of the history, which covers far more than the role of the Golden Dawn, I would have been lost. Ironically all that history fits into a fifteen year time frame in the Victorian era and emphasises that much of what we know as Western magic(k) is based in 19th century Christian mysticism. They didn't mention that the original GD members believed in celibacy, even between married couples, but it did point out that women were included and even influential in the Order.

Thelema & Aleister Crowley by David Shoemaker was no surprise as Crowley would have to turn up in a book of this nature. He was mentioned briefly in the previous chapter, but there was more focused attention on his magical influence in this one. The only thing that niggled is lack of information about the actual origins of the concept of Thelema, which is written about in Plato and the Bible.

Polytheistic Ceremonial Magic by John Michael Greer I found a little confusing. It started out with a welcome overview of magic(k) preceding the Christianisation of various systems, then suddenly I was reading passages from a couple of other authors. Perhaps some extracts needed introduction. It then goes into the authors own amalgamation of Druidry and Golden Dawn format ritual instruction as well as a couple of well-known rituals like the LBRP.

We wrap up with Magician's Tables by David Allen Hulse, something important to any book about Ceremonial magick, then The Future of Ceremonial Magick by Brandy Williams, which was, shall we say, abstract and more about the future of our world than specifically about where magick is going.

The author information, placing them both in the Caliphate OTO, explains the lack of mention of Kenneth Grant or of Austin Spare and the rise of Chaos Magick from the 1970s. Despite that, for someone completely new to magic(k) of any kind, the book does provide a lot of interesting history and context for a lot of practices still prevalent today. It would make a good companion book to go with the old texts mentioned throughout the book.