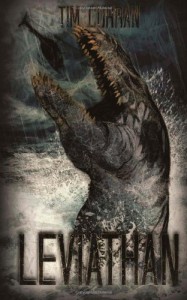 I've been hearing Tim Curran is good for some time and have had this one and Dead Sea on my Kindle for a while, so I finally decided it's about time I read one of his books! This one called me first.

I could see right away that the writing was good. The cover was enough to tell me to expect a good monster story and that's what I got. The beginning set up a situation that might be called predictable, but the execution is what carries it. A deserted beach with police warnings on a coast that is otherwise full of tourists and a monster on the cover... let's see... what might happen? As the protagonist is a photographer, it's guaranteed to happen up close.

Though I felt the character development could have been sustained longer, the story moved fast and was full of imagery and excitement. I read most of the last three quarters in one sitting which is a sign of a gripping story! I did feel that a few loose ends weren't adequately followed up at the end, but by then I was too out of breath to worry about it. I'll definitely be reading my other book by this author soon and probably more besides.