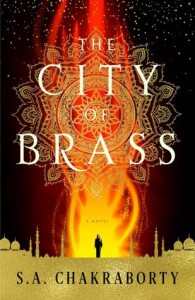 It's always a good sign when a story draws me in right away. An Egyptian healer with a natural ability to see sickness in people makes her living making a show of healing as if she were a charlatan. Until one day she calls up something she doesn't expect and suddenly she's involved with a world of Djinn and other supernatural creatures.

The story has a romantic, mock-Arabic feel to it and makes use of a lot of familiar mythology, as well as some original world building of the author's invention. It all works well and is a magical tale complete with flying carpets and faction wars between one form of supernatural being and another. Sort of Game of Thrones Aladdin style without all the sex and murder. Ok there might be a little murder...

Nahri, the protagonist, has some serious character flaws but it's easy to feel sympathetic for her trying to survive in a difficult world. There were a few places where it felt like a Romance writer took over the narrative, but for the most part the writing was good and I was caught up in the adventures.

The ending made me suspect a series is to come, which always leaves me with the feeling that a story didn't quite finish. Whether I would read a 'next book in the series' is yet to be seen, but it was an interesting world with distinct, developed characters and I really enjoyed the story.