The Upside of Your Dark Side 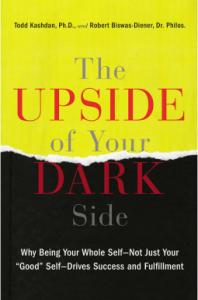 This is a Self-help/Psychology book about embracing your 'negative' emotions and living in balance with yourself.

It starts with a great example of how to test how people deal with uncertainty and the role that primal anger plays in competition sports. It challenges Maslow's theory of the hierarchy of needs and postulates that our expectations of what will make us happy are often wrong, a theory which appears very plausible.

The book focuses a lot on the idea that those who are most able to deal with negative feelings are most happy, live longest and are most creative. On the surface I would agree with this idea, but some of the specifics in the theory as put forward in this book didn't quite fit with my own experience.

The book suggested that we as a species have become easily stressed because we have come to rely on comforts. It also had some interesting insights about how being comfortable externally can lead to discomfort internally. The problem was that it was presented as a universal condition and didn't allow for naturally happy people to roll with the punches when they come, while still enjoying all the comforts of modern life on a more regular basis.

One complaint I had was that it was very American centric, using phrases like "We as Americans" in an assumption that the book's readership would be exclusively American and not acknowledging that the theories would apply to most of the Western world until much later on. Even then there were only passing mention of countries "closest to American".

It did go into more diverse cultural differences and made some interesting observations of expectation of 'emotional state' between individualists and collectivists.

I have to say that I don't accept their justification for temper tantrums or the way they all but glorify anxiety. In my experience, people who are angry are not more efficient or creative, but miss things because they are too wrapped up in their emotional state to think as clearly as they need to in a crisis situation. Even in sewing lessons I learned long ago that if you're feeling angry, put the creative project away until later because you're going to make mistakes.

I also felt at times that they were mixing up definitions of happiness with goal achievements. Yes, achieving a goal is one road to happiness, but it is not happiness itself. Some of the phrases used like "Happy people can be too trusting" in regard to politics and detecting deceit and "Happy people are lazy thinkers" in regard to "paying greater attention to the gist, not the details" really made me question the authors' qualifications. Have they never been happy? Do they really believe that feeling happy makes someone go stupid and unobservant?

Perhaps in general, some of these ideas may have some truth behind them, but as a generally happy person who will become very alert the minute someone tries to tell me a lie and someone who experiences happiness most when working on creative things, I found the theories seriously flawed. Still, there were some interesting ideas and if nothing else, food for thought as to what really constitutes happiness and the way that differences in attitude affect how any given person responds to the bumps in life.

It's an interesting read, but I recommend maintaining objectivity while reading and questioning rather than taking it all at face value.