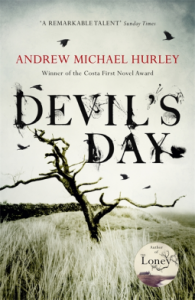 Every autumn, John Pentecost returns to the farm where he grew up to help gather the sheep down from the moors for the winter. Usually his grandfather, known as the gaffer, tells tales that always begin with the devil and local rituals are believed to keep the sheep safe over the winter, but this year the gaffer has died and John has brought his wife along where they will both attend the funeral.

This story is a slow burner. It starts out following a lot of what looks like conversation with no real point, though eventually it begins to reveal some of the local happenings that suggest the town really is plagued by the Devil. There is some Yorkshire dialect which was very well done, though I wonder whether it will translate well to people who have never heard Yorkshire people speak. Beginning sentences with "It were..." might look like bad grammar, but it's part of the local colour.

The one thing I found difficult was that there are no chapters, though there are a few section breaks starting nearly halfway through. It's one never-ending read with the occasional skipped line where I could decide to use my bookmark and continue later. The thing is, the lack of any real action in the first 75% of the book didn't inspire me to want to keep reading. It's like a snapshot of life in a rural Yorkshire Parrish with a dark secret or two. I finished wondering what was the point of the story and still waiting for something to happen, especially as there were some good hints of foreshadowing.

Not a lot of action, but the writing was good.