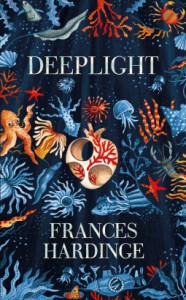 Hark and his best friend Jelt scavenge a living in whatever ways they can, especially if they can acquire some of the artefacts of the dead gods from before the cataclysm.

The world building in this one is fantastic. A group of islands that form the Myriad has a well-developed society, including old priests who remember the gods from just 30 years ago.

However, hints that the gods still have influence begin fairly early in the story. Subtle physical changes on those who deal closely with 'godware' or anything to do with the gods suggest potentially sinister undertones.

I got caught up in the action of this one very soon. The characters flesh out a little slowly, but there is enough going on to carry the story forward and Hark's character development makes noticeable strides by about a third through.

The story is very imaginative and I was particularly intrigued by the 'undersea', a sinister, magical ocean beneath the regular ocean where the 'gods' gain power. Near the end a lot of 'and this is what happened' information got dumped, but there was still plenty going on to reach a satisfying conclusion. A very enjoyable read.