Daughters of the Dragon 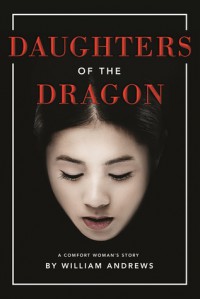 This is a powerful story. It's Historical Fiction, based closely on events that actually happened in Korea during WW2 and the Korean war and after. The story of Anna, a Korean war orphan, is fiction but much of her grandmother's story reflects things that happened to real people.

Quite honestly, I cringed when in started out written in present tense. However, the story itself was interesting so I persevered. To my joy, I soon learned that most of the story is told by Anna's grandmother and her history is all in past tense, so I could get sunk into it. I can sort of see how the author thought switching to present tense for Anna's part of the story might work, but it really doesn't. The change is too severe.

A fascinating, though unpleasant story unfolds about the Japanese occupation of Korea and the atrocious treatment of Koreans by their military occupiers. Men were taken off to war, many women were forced to work in factories, but some women were forced to become 'comfort women', as the book description implies. The dehumanising treatment these women received is disturbing to read, yet the historic aspect of it is gripping.

Apart from the main plot of the story, it becomes apparent that there is a mystery involved. What does it mean to be a daughter of the dragon? What does the symbol of the dragon mean? All becomes clear by the end.

This was one of those stories that once I started getting into it, I actually couldn't stop reading. I had tears in my eyes at the end and couldn't bring myself to start reading another book the same day. It taught me about a time and place in history that I knew little about and left me with very strong feelings about the horrors of war, the inhumanity of occupying forces and the human element in the conflicts of nations, especially the abhorrent treatment of women.

I usually mark down a star for present tense writing but not this time. I highly recommend it for anyone who enjoys reading Historical Fiction.