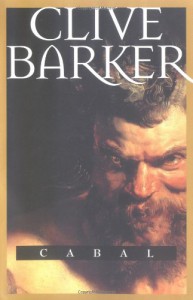 This story was the basis for the movie, Nightbreed, which I've seen many times. Normally I don't like serial killer stories, but the emphasis that interested me is the 'monsters' of Midian.

The story started out with the same premise as the movie; Boone is seeing a psychiatrist who shows him pictures of grisly murders and eventually Boone accepts that during his blackouts, he's committing these murders. But there is a supernatural aspect to it, a quest to find a place called Midian, where the monsters dwell. In a mental asylum, Boone meets another inmate who knows about Midian and gives him clues how to find it.

As I hoped, the book basically followed the same story as the movie, though the later parts were expanded and the book was able to better explain what happened underground. There were a couple of unexpected sexual scenes that didn't really advance the story, but most of it focused on the conflict between Midian and the local town police.

Towards the end there is some wonderfully contrasting prose, showing the beauty of the world of 'monsters' as opposed to the ugliness of the serial killer and the motivations that drive him. I think the ending was basically the same as the movie but the book allowed more explanation, so now I want to see the movie again with this deeper level of understanding.