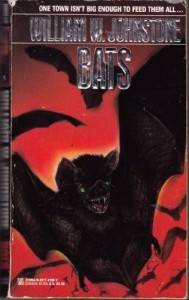 I felt this had a shaky start, rushed in some places and not something that would have drawn me in if I hadn't heard it was good, but the author did their research on the species of bat depicted and that always sits well with me. By the end of the first chapter, it started to flow better.

The plot did seem to move too fast in places. That's an unusual thing for me to say because I hate slow books, but there was no build up of suspense before we get a good look at the bats and as an old Horror B-movie fan, I felt that was woefully missing. It did get good, although the characters all seemed overdone, like caricatures of certain 'types'. The story itself felt well written apart from the lack of suspense. It was literate and descriptive with few typos, but the characters just weren't believable.

Just past halfway some really amusing action reminded me of something that would require Leslie Neilson and the cast of Airplane to depict in a movie adaptation. Hilarious, but not realistic. Downright silly in places, but I think it was intentional.

Overall the book was an interesting read and I do love animal/monster Horror, but I think most of the last third needed to be either cut or fleshed out. I got the feeling at that point that the author had become bored with his own story, alternating segments of 'telling' to say what became of peripheral characters or groups with descriptions of bat attacks that sounded like visual notes for a movie script. Also believability waned.

I kept reading because I wanted to know how the situation resolved, which I would call acceptable. Nothing gripping or emotional, just as I felt no emotional involvement with the characters. A generally entertaining read, worth finishing once started.